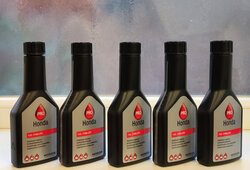 
The legislation requirements for lower fuel consumption and lower emissions put pressure on engine producers and they are forced to set the carburettor more finely and inject the fuel in more exact amounts. The percentage of the bio-ingredients in the petrol is higher and higher, that’s why the petrol increasingly tends to go stale and make a glutinous layer which can clog the carburettor.

These facts place higher demands on the engine maintenance made by the power equipment users than the users have been used to in the past. If the maintenance is neglected, problems with starting can occur (especially after a longer period of storing, for example during the winter) or the carburettor can even be damaged. That’s why we recommend to use only fresh fuel of good quality for all engines (especially since the year of manufacture 2006) on all VARI machines; a fuel stabilizer is recommended as well (available directly from VARI, one bottle can be used for 200 l of petrol; art. No. 08CXZ-FSC-250). Our recommendations for a longer storing (more than 2 months): leave both the petrol tank and the carburettor completely empty; if the fuel stabilizer is used (it treats the fuel for up to 6 months), fill the fuel tank completely with the stabilized fuel and leave it in the carburettor too.

Some fuel is left in the engine after the machine is tested during the manufacturing. To prevent possible problems with these remnants, especially when the machine is stored for a longer time before it is sold to a customer, following special measures have been made since the end of May 2012: