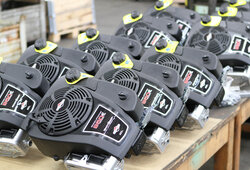 
Briggs & Stratton Company with its domicile in Milwaukee (USA) produce already more than 100 years engines, which are powerful, reliable, easy operated and maintained and have a long lifetime. These are only some reasons why for example 8 from 10 garden machinery brands rely on Briggs & Stratton engines to drive their garden tractors or mowers.

The history of Briggs & Stratton Company is in fact a story of small gasoline engines. Since its founding in 1908 in Milwauke, state Wisconsin, became this company an initiator in the development of these engines. Mr. Stephen Briggs was an electronic engineer and Mr. Harold Stratton was a corn tradesman. In the dawning of an automotive age these two businessmen drew together to construct gasoline powered vehicle. Nowadays is Briggs & Stratton the world biggest producer of small air-cooled gasoline engines for mowers and garden tractors, snow cutters, generators, pressure washers and for other machines and equipment. You can find these engines worldwide, while powering milking machines in Mexico, sugarcane shredders in Puerto Rico or fishing boats in Vietnam and of course garden machines in the whole North America, Europe and Australia.

The initiative E-SERIES™ which was presented by Briggs & Stratton in 2011 means a new standard of efficiency of small engines with vertical shaft and it is a producer’s commitment to overcoming the European standard limiting the exhaust emissions (2010/26/EU) at least for 25%. Between the most important recent innovations belongs the system ReadyStart®, innovative breakthrough starting system, which already became a synonym for easy starting. It entirely eliminates the need of a hand pumping of fuel and a choke adjustment before startup. The system simply delivers the exact quantity of fuel to carburettor according to the engine temperature.

Also the VARI customers can recently find in our offer Briggs & Stratton engines. Among the main advantages of the used 675EX SERIES™, 850E SERIES™ and 950E SERIES™ engines belong definitely effectiveness and power using the OHV technology (except for 675EX), easy starting using the system ReadyStart® and electronic ignition Magnetron®, silent running thanks to exhaust stroke Performance and long lifetime thanks to the quality diffusing lubrication and air filter with a paper liner.

More information about Briggs & Stratton are available on http://www5.briggsandstratton.com.