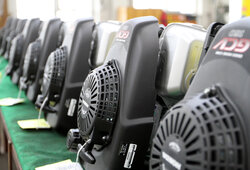 Honda engines, the best choice. When a young man named Soichiro Honda opened his own workshop to produce engine parts and engine powered bicycles in the Japanese city of Hamamatsu in 1928, nobody could have predicted what it will all mean to the world of technology.

Throughout his life he put his soul of a constructor and his energy in the development and people were surprised and astonished many times at the excellence of the motor vehicles. In 1953, HONDA decided to enter the sphere of technical and utility products and that's why HONDA offers a wide range of products with HONDA engines as their heart and driving unit. HONDA engines are superior to their competitors due to their high reliability, power, quality, low fuel consumption, and - what is a very important concern today – environment-friendly characteristics. HONDA is currently the biggest manufacturer of internal combustion engines in the world. Already in 2006 was exceeded the frontier of more than 20 000 000 HONDA engines produced during one year! For all these reasons and taking into account HONDA’s decades long experience in the production of cars and motorcycles, we have decided to combine the quality of HONDA engines with the reliability and tradition of the VARI brand. Since 1993 after long testing procedures we began to equip our products and machines with HONDA engines, which contribute to their high technical quality. Someone may ask, what can be revolutionary in the engines of the gardening machines? It is the only engine of its class in the world equipped with the OHC technology which is used by the most successful car manufacturers thanks to its undisputed advantages. HONDA has developed as the only one producer a four-stroke mini engine as well which is intended for brushcutters and carried machines. The VARI customers can find in our product range modern OHC engines - HONDA GCV 160 or GCV190 engine, HONDA GSV 190 OHC semi-professional engine, HONDA GXV 340 or GXV 390 professional engines and last but not least a revolutionary mini four-stroke GX 35 engine.

The quality of the engines can simply be expressed in several points:

More information about HONDA engines are available on the websites:  http://www.honda-engines-eu.com/.